I grew up in Florida and not in a skiing family. After living in LA for nearly nine years, I’ve finally (in my, let’s just say, early 30’s) hit the slopes. After record rain and snowfall in and around LA over the past months and especially the past week, some friends pulled together a last-minute trip to Big Bear, about two hours east (without traffic). We hit the road after work on Friday for a weekend in the (rented) cabin. Trying skiing only for the first time as a grown adult, here are some of my big takeaways:

The first four hours of day two are GREAT. You’re building on what you learned yesterday and getting more and more comfortable and brave. Then your muscles just stop working. Your thighs are tired and your calves are screaming. Perfect time to find yourself a hammock and kick your feet up! 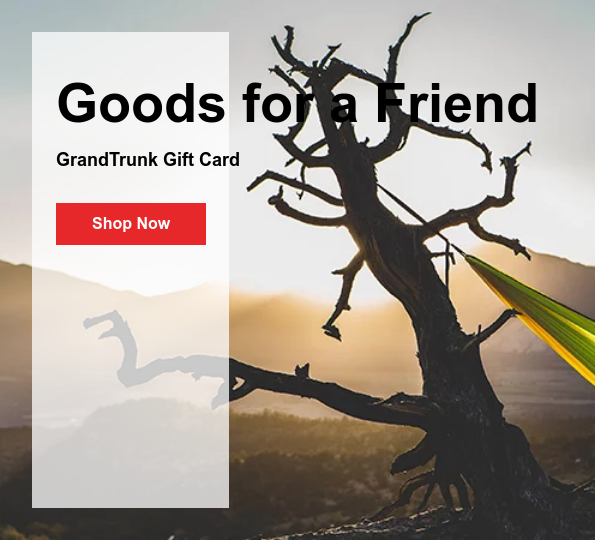 Purchased for my grandkids and they love them.

Comfortable and light chair. Very portable and quick to set up at the campsite. Definitely packable for short and long hiking trips. Would definitely buy again.

These are small and light. Both are easy to relax in with only the two legs, but the optional attached front legs are a nice touch and easy to use on the Mayfly. Haven't been to the beach yet, but going next week and I think these will fit my needs great. I can fit both of them in my computer messenger bag and still have room for my computer and accessories.

It fits comfortably. Dont drive while wearing it.

I have had a Monarch chair for eight years without any flaws. It has been on eight week long and many weekend trips. It is the luxury item that has never stayed at home.
I lost one of the rubber feet and contacted Grand Trunk. They offered me 50% off on the purchase of a new Monarch. I jumped on that and anticipate eight more years of THE PERFECT CHAIR FOR BACKPACKING.
TIP: Lean your bacpack against a tree or rock, lean while in the chair against the backpack and take a nap!
Thank You Grand Trunk for continuing to offer the Monarch in your line of chairs.