Grand Trunk is always looking for local experts to scope out our favorite cities. Those who travel often know it can be difficult to take-­‐in the best of a city in a short amount of time, but with a local to guide you, even a layover can be an adventure in its own right.

We love Chicago, we live here! And so does @kbucklandphoto, a Chicago photographer, who was tasked with sharing the best way to spend a short time in Chicago.

@kbucklandphoto: For me, it all starts with the flight in. If you’re only able to explore Chicago during a quick layover, one of the absolute best views of the city can be taken in while flying above it. Whether it’s been by plane, helicopter, blimp or drone, aerial photography of Chicago has become one of my favorite photographic subjects. Make sure you grab a window seat and keep your fingers crossed for that perfect flyby. Once you land in Chicago the quickest, easiest and cheapest way to get downtown from either airport is hopping on the CTA. Both the Blue and Orange lines offer unique views as you make your way into the city. Take either train into Chicago’s Loop and you’ll find yourself in the heart of the city. Hop off at the Adams/Wabash stop and take the short stairway onto the overpass before you start your explorations. The leading lines from this perch will give you an amazing view that you won’t find in any guidebook. The play between Chicago’s elevated train and it’s architecture is something unique to our city and is on full display from this vantage. At this point, with no guidance whatsoever, you could walk in any direction from the loop and find something that catches your eye. Take my advice: even though it might be one of the most popular tourist destinations in the city, Millennium Park should be on everyone’s list. Originally intended to celebrate the second millennium, Millennium Park opened 4 years behind schedule and quickly became a Chicago staple. Highlights include Cloud Gate (The Bean), Crown Fountain, Pritzker Pavilion, Nichols Bridgeway as well as the BP Pedestrian Bridge that leads to the brand new Maggie Daley Park. Alive with music and events in the summer, Millennium Park is worth visiting in any season. Winter brings on cooler temperatures, and that means on some days, you’ll get the Bean all to yourself. The iconic Michigan Avenue–the “Magnificent Mile”–runs along the western border of Millennium Park. Following Michigan Ave north will lead you directly to the Chicago River. The development of the Riverwalk opens up a brand new experience to locals and visitors that is ripe with photo opportunities. With new additions in the works daily, this is an exciting ongoing project. While exploring the Riverwalk, you’ll have access to a variety of architectural boat tours.  Chicago’s First Lady and Mercury Cruises offer many options. My personal favorite, that I had a chance to enjoy during #ChitectureCruise2, is Mercury’s Chicago By Night Cruise. Coasting a few miles into Lake Michigan to get the perfect view of the sun setting behind the skyline is hard to beat. The cruise moves from the lake, through the lock system and back onto the river where you’ll be able to take in Chicago’s architecture and learn about the city’s rich history. No Chicago visit would be complete without ascending one of its many skyscrapers. As you continue to head north on Michigan Ave, about five city blocks north of the river, you’ll bump into Chicago’s 4th tallest building, the John Hancock Center. The appropriately named observatory, 360 CHICAGO, offers 360 degree views of the city. I’m always amused to witness people’s amazement by just how vast Lake Michigan is. From this height, it really looks more like an ocean than a lake. You’ll be treated to views of Chicago’s most popular beaches, along with a perfect view of Lake Shore Drive, as you look north. On the south end of the observatory, you’re able to see Aon Center, Trump Tower and Sears (Willis) Tower–Chicago’s 3 tallest buildings–perfectly lined up. You wouldn’t think you’d find many locals at this spot, but they make frequent visits to capture images of Chicago under its varying conditions. Myself included. If weather is just right, you’ll be able to catch one of the best atmospheric phenomenons, fog. The list goes on and on. There’s far more to see and do in Chicago than could be captured in one blog post, and I’m supposed to be suggesting tips for a long layover rather than a week-long stay. But If you had just a little bit more time to kill before a flight, continue heading north from Hancock. Cross under Lake Shore Drive and you’ll soon be on the Lakeshore Path, which runs north and south for miles and offers amazing access to the lake and skyline views. Anytime I have a friend in town that’s looking to take a picture, I’ll take them to North Ave. The way the lake and skyline fill the frame at this location is perfection. And conveniently, you’ll notice that this is a great place to pop a hammock up and relax before you have to catch a cab back to the airportó. What’s that? Too hungry to hammock and chill? Nonsense. What’s that? Grand Trunk wants me to answer the obligatory what pizza to eat question??? Fine. Chicago’s food scene extends far beyond pizza, but that seems to be on the top of everyone’s list when visiting. If you’re looking for Chicago deep dish, Lou Malnati’s has been my favorite since I was a young buck. There are many other varieties and you’ll hear something different from everyone, but this is my write up and I’m telling you to go eat Lou’s. Another local favorite that I would highly recommend to anyone visiting is Piece Brewery and Pizzeria. This joint serves up New Haven style pizza, with slices as big as your head, that you can wash down with home-brewed, award-winning beer. Local legend and ‘Sausage King of Chicago’ Hot Doug (sorry, Abe Froman) teamed up with Piece to make the Atomic Pizza a permanent fixture on the menu. This red pizza comes with pepper jack cheese, caramelized onions and Hot Doug’s Atomic Bomb sausage. It’s truly a thing of beauty.

If you’re in a rush, you can find another iconic Chicago photo spot and grab a quick bite back at the airport. O’Hare’s Terminal 1 offers a unique photo opportunity in the tunnel that connects Concourses B & C. It’s a polarizing fixture of O’Hare airport, as some people love it and some people hate it. For me, the overhead neon light sculpture is a perfectly hashtaggable design that you can shoot while watching people rush to catch their flights. And who doesn’t love hearing the United Airlines theme song while the ‘moving walkway is coming to an end’ alert plays over and over again? Amiright? On your way out, stop by and grab a milanesa from Tortas Frontera by local celebrity chef Rick Bayless and catch your flight. Or grab a hotel because at this point, let’s face it, you’ve probably already missed your flight. 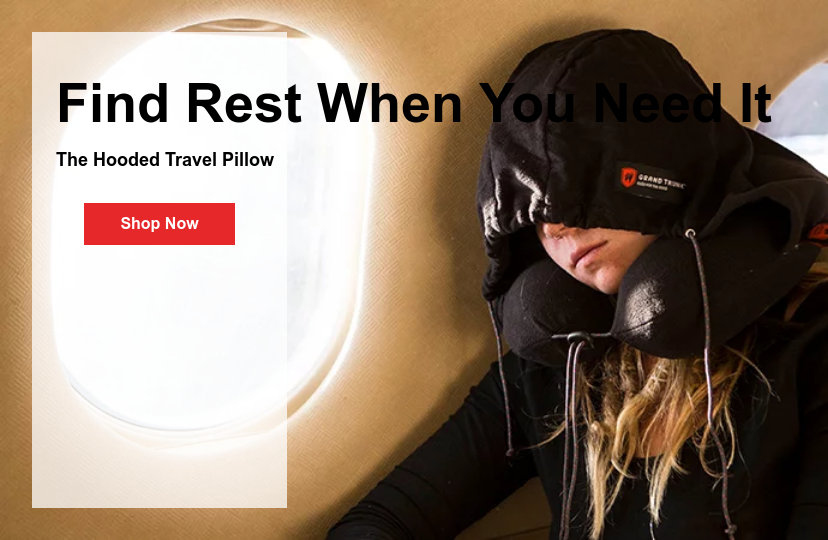 I received my first parasheet blanket back in 2006, and I've taken it away with me every time I travel. At so many beaches, I keep being asked what I have and where I can get one. Very happy to pass on the recommendation.

It takes me longer to find a tree than to hang this hammock! The lightweight construction and built in compression bag make it so easy to take this on adventure. I’m very happy with my purchase.

My new wallet feels trim, accessible, and minimal. It fits great in my fanny pack! The construction feels durable. I bought several as Christmas gifts!

Love this hammock. Super easy to set up, great quality, and most importantly my kids love it.

Awesome hammock and built to last. This is my second one I’ve bought. I lost my other one in a house fire but loved enough to get another one just like it.